Lilith is Adam's first wife
Lilith who is in total opposition to this one leaves him.
Lilith (Hebrew: לילית) became a female demon in the Jewish tradition.
Eve in Hebrew : חַוָּה ḥawwā(h))

Mother of humanity is therefore the second companion of Adam. 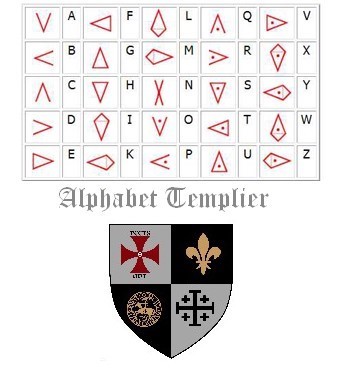 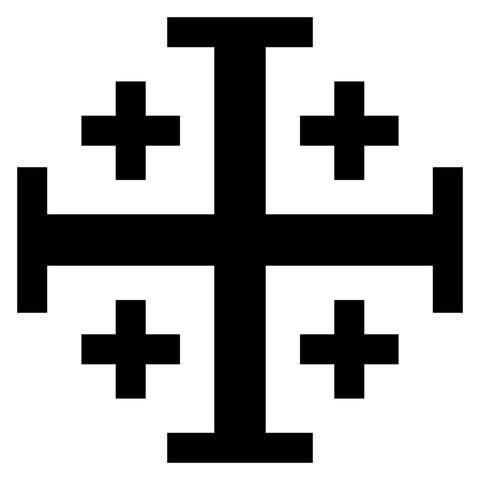 explanation for the Rosary Cross of Jerusalem 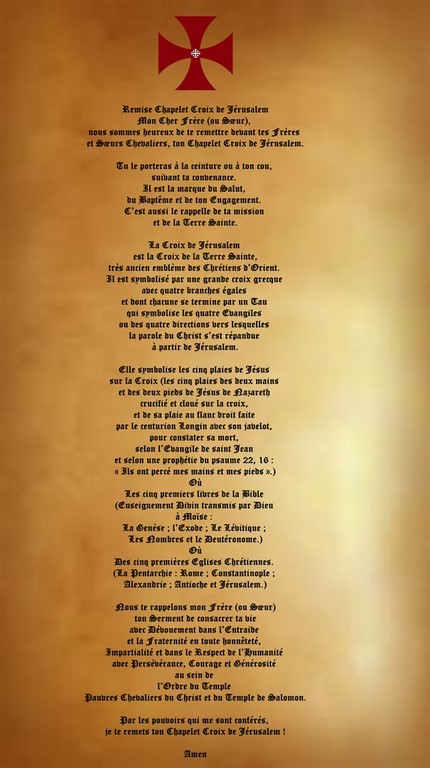 Jacob was the youngest son of Isaac and Rebekah and the grandson of Abraham.
He is the father of twelve sons who will be the legendary founders of the twelve tribes of Israel.
He is one of the patriarchs of the Bible.
Rebekah indulges in the joy of motherhood, as the twins she is expecting already seem to be fighting within her midst!
The oracle she receives from the Lord opens and announces the story to come
"One will be stronger than the other and the great will serve the small" (Gen 25:23).
From their birth, the story likes to show both their unity (they are born connected to each other) and their physical difference, as if to better emphasize what can be artificial for twins the qualifiers of elder / cadet or even large / small, often fruit of successive dislodgements from the maternal breast. The story will be marked by this evil originating from the twins who constantly seek both in rivalry and resemblance a privileged place and come up against the desire never fulfilled to be unique. The narrator insists on everything that differentiates and separates them, their physique and their character, but also the space where everyone likes, and especially the cross-preference of each of the parents for one of the two twins, Isaac for Esau, Rebekah for Jacob (25,28).
It all began that night, Jacob got up, took his two wives, his two maids, his eleven children, and crossed the ford of the Yabboq. He made them pass the torrent and also passed what belonged to him.
Jacob remained alone. Now, someone struggled with him until dawn rose.
The man, seeing that he could do nothing against him, struck him in the hollow of his hip, and Jacob's hip was rejected during this fight.
The man says, "Let go of me, for the dawn has risen." Jacob replied, "I will not let go of you unless you bless me."
The man asked, "What is your name?" He replied, "Jacob."
He continued, "Your name will no longer be Jacob, but Israel (that is, God struggles), because you have fought with God and with men, and you have won."
Jacob asked, "Let me know your name, please." But he replied, "Why are you wondering my name?" And there he blesses him.
Jacob called this place Penouël (that is to say: Face of God), "for," he said, "I saw God face to face, and I had my life saved.


The Twelve Tribes of Israel
Jacob's 12 children
The twelve tribes of Israel were founded by the twelve sons of Jacob.
An exception is made for joseph's two sons, born in Egypt and adopted by Jacob as his own sons (Genesis 48:5) and thus placed at the origin of two tribes. There would thus be thirteen tribes, but that of Levi is considered to be apart from the twelve, God having entrusted him with the priesthood between Him and the people.
In Jacob's day, the phrase "the twelve tribes of Israel" still included Levi, while Ephraim and Manasseh were counted together as Joseph. But at the partition of Canaan, Joseph's sons were given two separate territories. 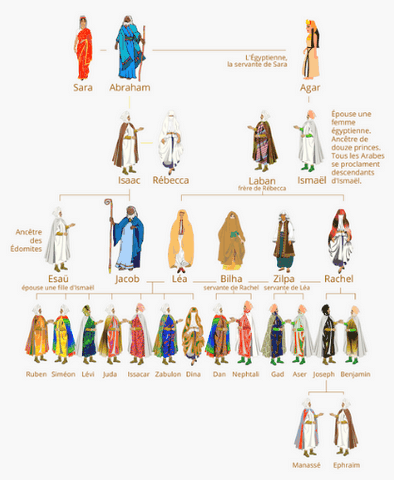 Circumcision of the heart

The seven main virtues of circumcision of Moses' heart.

These virtues are wisdom, compassion, mercy, righteousness, love,
humility and charity that together express the holiness of a person. Here are some
the definition:

• WISDOM: quality of the person prudent and moderate in all things.
• COMPASSION: a feeling of pity that makes man sensitive to the evils of others.
• MERCY: greatness of soul that pushes to forgive the guilty.
• RIGHTEOUSNESS: loyalty of the honest and just person.
• LOVE: affection that one feels for beings or for something.
• HUMILITY: complete absence of pride and respect for others, which prevent from
rule over his fellowmen.
• CHARITY: generosity of the heart that pushes to help any being in difficulty.

To circumcify, means to cut what is bad, so that these
feelings and those virtues that necessarily make holy of mind and noble of heart.

Moses appears as the prophet and guide who led the Hebrew people out of Egypt, where they lived in bondage, after the ten plagues inflicted on Egypt allowed their liberation. ...

Son of Amram and Yokebed, Moses is the first character to be named "man of God" in the Bible (79 times in the New Testament).